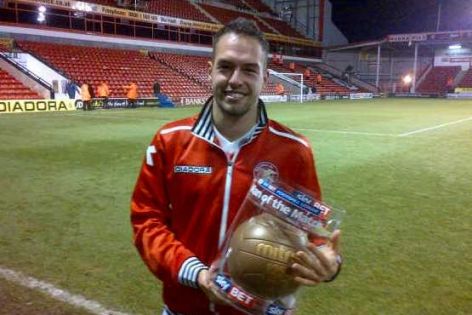 Game-winning goal, assist and ´Man of the match´ holder. This was Milan Lalkovič in League One´s battle between Walsall and Peterborough Utd (The Saddlers won 2-0).

Slovakian´s excellent Monday shape resulted into his second seasonal and the goal assist, which fixed home victory on 2-0. Milan brought the joy to Bank´s Stadium in first half´s middle, after the ball from Sawyers put him away in the inside left channel and got his body accross the defender before advancing and slotting neatly past Peterborough goalkeeper and into the far corner.

"I´ve got a fine ball on the left and tried to get ahead of their defense. I brought it quite close to the net and that´s why I fired to the far post. Fortunately it was hard enough to get inside," sums up Milan his impressive strike. "This is what I was waiting for so long," added Milan.

"It´s been a tough game. Peterboro were third and we could not afford to let the top of the table go. Thanks to this victory we are just point behind the play-off position. If only we could hold this shape, I think we deserved the victory and if we had not missed some of the clear opportunities tonight, we could have been comfortable much earlier," added Chelsea loanee, who was awarded Man of the match after the final whistle. "I appreciate this so much, thanks to everybody, firstly to my team and the staff who helped me reach this. Hopefully, we can continue winning and climbing up the table."

Player´s daddy, accompanied by Lalkovič´s agent Milan Lednický could not miss this game and encouraged their youngster directly at the venue. "Milan was really outstanding tonight. We hope he can hold this shape for longer time and get more and more experience," says Lednický, who has made a stop at Chelsea´s Cobham facilities within this trip in order to talk about his player.